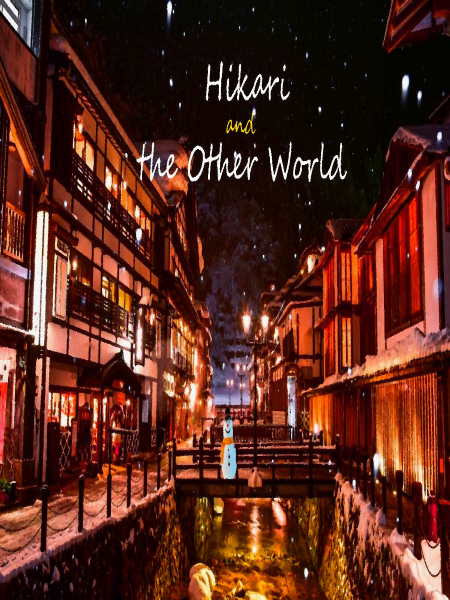 Hikari and the Other World

A down on her luck Hikari Abe is tired of living in the quirky city of Tokyo and feels nothing is going her way despite her best attempts to improve her lot in life. The New Year approaches and a new decade of opportunities is coming Hikari's way but things go strange when she boards a train that is more than meets the eye.

Thanks for your comments! I can confirm that there are plans for a sequel to this entry so you will be seeing Hikari and Hiroto again in the near future. I wanted to create a strange fantasy story that is similar in feel to some Studio Ghibli films. I see that these types of plots don't seem to be a particularly common feature in Write Wise entries and I believed that this entry would be breaking new ground. I also wanted to celebrate the end of this decade and I thought that a 'race against time' plot fitted very naturally considering the importance we pay to the clock at this time of year.

As for my next story, I will be keeping things a lot more grounded and will be writing a slice of life book that will be somewhat similar to the starting sections of Hikari and the Other World. While I did enjoy writing the bizarre and wonderful weirdness involved in this tale, it will be refreshing to explore the more mundane aspects of life in a character driven plot.

Well done. This was definitely one of the weirder entries we have had in a while - very much inspired from Spirited away in a few key scenes including the ghost train.

The story line was Interesting enough although sometimes a little predictable ( specifically the chapter where the main character faced her fears). As Jordan stated the slice of life elements were well executed and felt just as much a part of the story as the main quest.

The lore was a little heavy at times but was executed well enough within the limited time you had with the key characters.

It will be interesting exactly where this one goes with the equal. Good Job.

Nice work. This story was definitely very creative and full of content. There were a lot of great themes and settings here that were new for Write Wise. In particular, the choice to set the story in Tokyo gave the whole narrative a very fresh feel. This coupled with the well explored Other World led to the story having a great sense of location that kept the story alive.

Characters were well written too. Hikari and Hiroto were both well written and interesting characters. Hiroto's own 'adventure' (which was just leaving his flat) was a nice segment. Hikari's struggles with coping with her demanding job and her insecurities with being lonely were also good motivators that were well explored.

Scenes were well choreographed. Your stories always feel to me like they are somewhat written for a more visual format such as cinema, but this leads to descriptive style of storytelling with detailed action that has become characteristic of your writing. There were a lot of backdrops that I really liked in this entry. The fun fair and the fortune teller machine were very nice details I thought.

The more 'slice of life' segments where no action was taking place before the fantasy elements came into play were very well written and would work well on their own as well.

Overall, a very good job. As Aaron has suggested, I imagine we will be seeing a follow-up to this. It would be interesting to see how much of a follow-up would be revisiting existing setups and how much of it would be newly created for the follow-up. There was a lot of lore created for this entry, and a fantasy story such as this often gets its power from that lore being new and mysterious for the reader.

This is definitely one of Write Wise’s more bizarre and “out there” stories! I thought it was well written, and enjoyed it a lot on a few different levels.

First of all, I should mention the characters. They were well developed, with very human weaknesses – and, in a story that was as surreal as this one, I think it was important that the characters grounded things a little – that made them interesting and relatable. Hikari and Hiroto were the highlights of the story for me. Not only was their relationship with one another interesting and well developed, but their individual life problems were believable and kept me invested in both of them. Hikari’s fears of being a lonely adult for the entirety of her life and Hiroto’s fear of the outside world tied into the story very nicely.

The other striking aspect of the story was setting. We had two vibrant settings: Tokyo and the “Other World”. Both were well drawn and vivid. The Other World, and the accompanying lore with Crassus and Octavius (which was well told, by the way), was intriguing. I liked, too, how you transitioned from the normal world of Tokyo to the Other World, and I thought your imagery and descriptions were good here.

Also, though he didn’t get much “screen time”, I really liked Goro, who acted as a necessary sidekick for Hiroto as he ventured out of the apartment. He had some nice little moments that brought levity to the story. (Maybe I just like ferrets, though...)

This felt somewhat like part 1 of something larger, mostly because of the ending. I assume we can expect a follow up piece?

In summary: this was an enjoyable story, Falcon, with lots of memorable characters and scenes. Well done and thanks for entering!