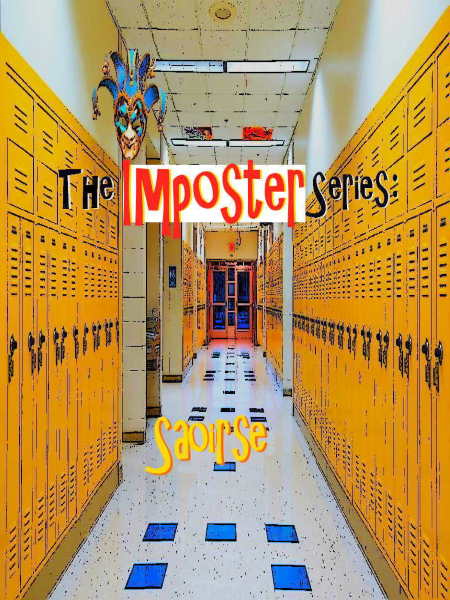 Saoirse Fitzpatrick is drifting through life. Friendless and timid, she walks around school like a shadow. Unnoticed or ignored by all of her peers. One day things change. A helpless Saoirse finds herself being picked on by a bully. Unexpectedly, one of the popular girls come to her rescue and Saoirse's life begins to change forever...

Thanks very much for your comments! I am glad that you all enjoyed this story. I had great fun writing something that was so different from my usual style and the genres that I would normally dabble in. I especially found it a nice change of pace to be able to write something grounded in reality after writing the weird and wonderful Hikari and the Other World beforehand. I also found the new way of writing to be a bit more flexible than my older approach, allowing for a lot of fun back and forth dialogue between the characters and opened up room for several scene changes within a single chapter which I found to be very effective. I was also keen to expand into the as of then untouched 'Romance' category. While plenty of stories on Write Wise had romantic components to their story lines, Saoirse was the first entry to be labelled as such.

I wouldn't be surprised if I turned my hand to writing more slice of life entries in the future but I find it unlikely that Saoirse would be getting a sequel or prequel. While there are certainly plot points that could be expanded up, such as Saoirse's absentee mother, I feel that the most interesting part of Saoirse's story has already been told. This was a period in which she found out who she was and I don't think a follow up could have the same sort of stakes or pay off. If there ever was to be a continuation of some sort, it would most likely follow the lives of other characters such as Aoife or Mr Miller rather than this entry's more primary characters as their stories could still be expanded into new territories.

While Saoirse was undoubtedly the main character, I wanted to flesh out other characters as well including Seymour, Tallulah and Keely-Anne and give them their own plot lines or struggles to overcome. This would add to the authenticity of their characters and bring them alive. Seymour in particular had a lot of threads dedicated to him which I thought would be a great way of building upon his character, his background and as an opportunity to further explore the idyllic little coastal setting of Mara. There were a lot of characters involved but I attempted to give them their own unique personalities whether it be the nerdy duo of Kieran and Seamus, the zealous Sister Agatha Rowing or the jealous bully of Grainne. I also enjoyed putting in a lot of pop culture references that Saoirse is so passionate about, especially her love for horror, and I believed that this added to her overall personality .

My next entry will be coming out shortly and it is progressing well. While it is a return to my more traditional ideas, the writing style is a bit different from what I would usually do and you will be hearing more about it soon. The Imposter series will return next year as part of Write Wise's 10 year anniversary in which I will be tackling Aaron's bibliography in a similar manner as to what I have done for Joh's entries in Saoirse. It is safe to say that while I don't have the entire plot planned out at the moment, there will be no shortage of lycanthropy involved and monstrous creatures howling at the shimmering moon.

Congrats on this one - definitely one of your best stories to date without a shadows of a doubt. I liked the more grounded approach of the story, it made everything feel more relatable and gave the actions of the characters real weight and meaning.

Great set of characters both heroes and villains - everyone felt very authentic and the interactions/banter between characters was very believable.

Overall it was just a very pleasant read - lots of ups and down, laughs and heartache. Very well done.

Congratulations on writing your second novel, and writing Write Wise’s first (I think) romance! You definitely departed from your usual topics and storytelling techniques when writing this one, and the result was a very fresh and unique piece that I really enjoyed.

The characters really are the focus of your story, and you had some excellent characters. Some of my favourites include: Saoirse herself, whose nerdy interests and close relationship with her father were endearing; Saoirse’s father Seymour, an everyman who was easy to relate to and sympathise with; Saoirse’s gang of friends – Keely, Josh and Aidan – all of whom were memorable characters in their own right (the chemistry between the four friends was one of my favourite aspects of this story); and of course the delightfully villainous Grainne (I mean… what a complete nightmare…) and Sister Rowing. I have to admit Sister Rowing, and her diatribes, were a real highlight for me.

The dialogue felt very natural throughout. The lines between the four young friends were especially well done: they had an easy, comfortable companionship that was enjoyable to read. And there was some great comedy moments too, courtesy of Kieran and Seamus who were a fun double act throughout the story.

The characters all developed nicely as the story progressed. Saoirse came to terms with her confusing feelings, Seymour finally found stability in his life again, Keely had to decide between Saoirse and Aidan, and Sister Rowing got a much deserved job promotion. I feel you managed to give most characters their own little storylines, and they all came together nicely.

You managed to conjure up a pleasant, sleepy background setting in the form of Mara. The sense of place in the novel was very well established.

Excellent job on this one. I really enjoyed it. This is definitely my favourite of your stories to date. I think your storytelling was at its very best. I think your characters were stronger and more interesting than ever before. I think the plot was top notch with great drama, conflicts, scenes and themes. As well as your writing and storytelling being at peak performance, I think this story wins a lot of points with me for being one of my favourite types of fiction: a character drama grounded in reality. These types of stories will always be by favourite, and you pulled off an excellent story of that genre.

Saoirse is the star of the show, and is a very well written and very well fleshed out character. Her relationships with other characters all felt genuine, and I enjoyed her characteristics such as her movie loving and trivia spouting throughout the story. Her inner thoughts and her dialogue were both well written and she was just an all-round great main character to build a story around.

My favourite part of the story was the interactions between characters. I really liked Seymour's difficulty in bonding with his daughter, and I feel like their up-and-down relationship felt realistic and satisfying.

I really liked the character of Keely-Anne, and Saoirse's relationship with her felt well written and believable to me. I like her as a friend character in the early chapters, and her handling of Grainne in the early chapters was fun. I especially liked her telling Grainne that it was Grainne that she fancied. Keely-Anne's immunity to Grainne's control and her disinterest in Grainne's nonsense made her a likeable character very early on. Her friendship with Saoirse is nice, and Keely-Anne is a fun and likeable character overall.

The romance and love triangle themes were well handled. I thought that these themes were very fresh and I don't think any of the romance plotlines ever came across as cliched, eye-rolling, fake or boring - and I think that's a big accomplishment for a story touching on these themes. The main love triangle between Saiorse, Keely-Anne and Aidan was particularly strong. I find that love triangles in fiction often suffer from having a very obvious 'true' pairing (that the audience is intended to root for) which detracts from the powerful conflict that a love triangle can have on a reader. I think you handled this well however. This is true for this story as a whole: by fleshing out your characters well and making everyone interesting to read, all of your character interactions, plotlines and dramas are significantly improved. These aren't easy things to achieve, and as such: it's very impressive that you've pulled it off at such a large scale with both a very long story and with a large cast of characters. So very, very well done.

One problem with a long story is that it's hard to write a comment that covers everything. I flicked through all of the pages again after finishing the story and found it satisfying to see how much ground the story covered. There's a lot of great scenes that deserve a mention, but I'd be afraid of forgetting to mention a really good one. Indeed, there were a lot of great elements to this story. I will pick out a few that come to mind, but there really was a large wealth of things worth mentioning in this story, so apologies for only picking out a handful.

I really enjoyed the recurring gag of Seamus and Kieran arguing over "who would win in a fight" and silly things like that. I found their mannerisms in these scenes to be amusing.

The Sister and Grainne made for good antagonists without being over-the-top villains. As a counter to the Sister, I liked the role that Mr Miller played.

The whole prom build-up, the prom itself and the aftermath were all well done and made for very good reading.

Overall, I really, really enjoyed this story. I think it's your best written to date and I thoroughly enjoyed reading through it (hence how I was able to read such a long entry so quickly!) I think it was a very fresh story and it maintained my interest from start to finish. No scenes felt pointless or unnecessary. Indeed, I don't think I have any criticisms at all.