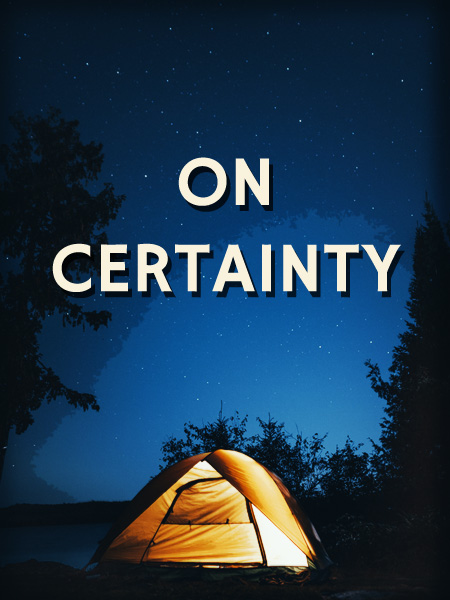 Nathan’s ordered world comes unstuck. His job is in jeopardy and, as though this weren’t bad enough, his wife now wants to indoctrinate their child into fundamentalist Christianity. What’s a man to do in such circumstances?

Thanks for reading and commenting!

Excellent story - I really enjoyed this one. The writing was top notch and felt like a professional work. The story and storytelling were both well done. The characters were perhaps your best to date. Pacing was very good and the whole piece came together very nicely.

I liked how you had three different characters that each had their own storylines that interweaved. The characters and their issues all felt well done, believable and interesting.

Nathan's story was well written and believable. I liked his interactions at work, both with those he was in charge of and with his own boss.

Jacob's storyline is probably my favourite. He felt like an authentic teenager. I really liked the summer camp segments and I thought the diary entries were very well done.

Rebecca's struggle to make Jacob a good Christian was a good plotline, and I really liked the backstory behind her strengthened faith, especially how it contrasted with Nathan's loss of faith over the same turning point.

Mitch was of course a highlight, and the final scene with him was very funny. It was a good climax and I liked how it tied all three of the main characters' storylines off in the same scene.

I don't have any criticisms of this story: it was pretty flawless.

A good start to this year's Write Wise challenge. There was a lot going on in this entry and plenty of characters with their unique traits or personalities for the reader to follow. The relationship between Nathan and Rebecca was handled well and is one of the main sources of drama that drives the story forward. It set up an interesting framework for Jacob, who is unsure of what he believes in, to be at the whims of his more demanding mother and his more laid back father being unable to help him. I also believe that you came up with an interesting narrative reason as to why Nathan lost his faith and why Rebecca dove more into it. The writing was nicely done, especially the dialogue, and the humour hit its mark.

I think that Nathan has the most intriguing arc out of the main three characters of himself, his son Jacob and his estranged wife Rebecca. The testing of his loyalties, between his old friend and boss Roland and his other team meets such as Martin and Patricia, was a good piece of drama. The reader wanted Nathan to prevail when facing such obstacles, whether it be in his working life or his increasingly complicated domestic one. The truce between Nathan and Roland, though initially frosty or uneasy, was a highlight of this entry for me. It was a great bit of characterization of the two once great friends.

As said I earlier, there were a lot of characters and this allowed for more representation of different beliefs, whether it was the more extremes of Christianity such as Pastor Mitch or one with more liberal inclinations, in comparison, such as Pastor Wickman or the easy-going Brian. The atheist view was also put forth by the minor character of Avery Williams, in a sometimes mocking manner of Christianity, while Nathan was a good example of the former Christian that had been ground down into disbelief through world-weariness and attrition.

I was amused by the bizarre antics of Pastor Mitch, who despite only turning up near the final chapters, was something of a scene stealer with his stereotypical American televangelsit gimmicks. Other minor characters that I liked include the always happy group leader of Daniel, Michael's quirky father and the seemingly shameless Michael himself who put Jacob on his troublesome path. I also appreciated the ending which was a nice ironic turn of fates. A good entry overall. I look forward to what you are going to do for Write Wise's 10 year anniversary next year.