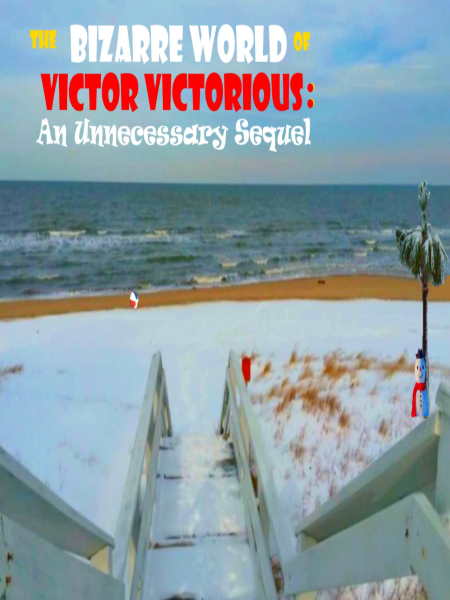 A group of board members try to cobble together an idea for a sequel to their latest cinematic release. Intergalactic trucker, Victor Victorious, adjusts to his new life after his previous escapades made him famous across the galaxy. The beautiful actress, Valerie Velvet, is stalked by a mysterious figure known as the Phantom....

This entry in the series took it a step further by having the boardroom plan the sequel in parallel to us reading it. The first entry definitely didn't take itself seriously, but this one ups the ante with this framing device which makes the reader question what's fiction and what's fiction-within-fiction. This became one of the most entertaining elements of this entry for me.

It was quite an absurd story, and the members of the board insulting the majority of the story's decisions left me unsure of whether I was laughing at the story or laughing with the story. The title of the entry says it all, really!

I enjoyed reading this one. A lot of the characters and plotlines seemed a bit needless (and needlessly ludicrous) - but it also seemed that that was intentional (especially with the likes of Straight Steve and The Wizard Lord). There was definitely a lot of wit and commentary throughout however. The boardroom scenes were a highlight for me and the humour in those sections felt very on point.

The Pinkertons (well, the remaining half of the Pinkertons (my favourite half)) remained a highlight for me as well, although they didn't play as big a part in this entry as they did in the previous entry, or as big a part as the earlier chapters suggested to me that they might.

There was perhaps an overabundance of elements going on at times, but this is likely a question of taste more than anything else. I often find that sci-fi and fantasy with a lot of "in-universe lore" can be quite noisy and distracting. Lots of unfamiliar territory such as exotic aliens, crazy planets and bizarre cultures can sometimes make it hard to fully engage with the characters and the story. I find this especially the case in writing. With everything visually represented, it feels a bit more obvious what to focus on and what to disregard. I reckon this is a taste thing.

Overall, I enjoyed it. The commentary remains a focal point of the series and this aspect is very strong. Humour was good. Action was suitably chaotic. Characters (my favourite aspect of stories) and their dialogue are not the strongest aspect - but I feel that this is a weakness (or perhaps just not a factor) of the genre rather than a weakness in the story.

A good story overall, Falcon. It blends humour and action well, and managed to effectively retell the same Victor Victorious story while adding enough novelty to keep it fresh.

Much of the story’s characters were from the previous story, and it was good to see what had come of them – to see how they had developed. Victor, while still bumbling and incompetent, seems to have nonetheless become a stronger character, slightly more confident in himself, presumably bolstered by his escapades in the original entry. We also got to meet colourful new characters, such as the clueless but self-assured President Coolidge, the easily-offended Zizz and, of course, Straight Steve, whose B story never quite took off. 😁

One of the interesting additions to this story was the incorporation of a quasi-framing structure. The link between the sequel being planned in the boardroom and the events surrounding the wedding at Galaxia was blurred somewhat – it wasn’t clear whether there was a direct link or not – but it served, either way, as an interesting running commentary of sorts.

As with the original, there is disguised social commentary at various points – such as Zizz’s conflict (or potential conflict) with her boss Coolidge, and the production company’s blind reliance on unoriginal sequels to turn a profit.

I thought the ending, with Victor and Valerie sharing a quiet moment together, was a satisfying way to tie things up.

Are there any plans for a third Victor Victorious … or does that depend on the whims of President Coolidge?

Looking forward to your March entry!